Bulls Beware: A Dark Cloud Is Forming Over Oil Markets

OilPrice.com
Investors need to pump their brakes
Crack spreads are a good proxy for oil demand
It's best for investors to adopt an attitude of cautious optimism. Bullish sentiment appears to have returned to the stock markets with a vengeance. In a historic rally that has taken even die-hard bulls by surprise, the S&P 500 has managed to claw back all of its 2020 losses, taking just 53 sessions for the index to fully restore the nearly $10 trillion in value it shed in an epic bear market. The oil markets have been nearly as impressive.

After entering negative territory for the first time in history, U.S. WTI prices have briefly touched $40 per barrel of oil (bbl) amid record production cuts and an uptick in global demand. Oil and gas stocks have doubled from their March 23 nadir, marking a sharp reversal from the precipitous drop that wiped out nearly 2 decades of gains.

There's no shortage of bottom fishing opportunities in this market, with shares of bankrupt or near-bankrupt shale companies including Whiting Petroleum, Chesapeake Energy, California Resources Corp., and Valaris Plc as well as offshore drillers Borr Drilling Ltd , Noble Corp., Seadrill, and TransOcean recording triple-digit gains over the past week alone.

But analysts are now saying investors need to pump their brakes.

A cross-section of Wall Street has warned that there's too much irrational exuberance in the markets, and the oil price rally is not fully supported by fundamentals. 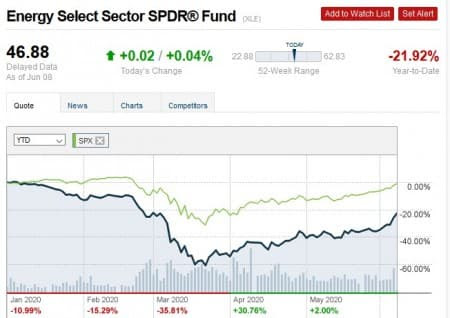 Watching the Crack
According to Warren Patterson, head of commodities strategy at ING, as well as analysts at Goldman Sachs, refining margins, aka crack spreads, across different regions around the globe are still way off their norms, portending continuing weak global demand for distillates.

U.S. crack spreads clocked in at a mere $9/bbl last week, compared to $21.00 at the same time last year according to Reuters, while crack spreads for European diesel dropped to a record low of $2.90.

Crack spreads are a good proxy for oil demand with falling spreads a sign of weak demand and vice-versa. The badly squeezed margins for refiners is a worrying sign that global demand remains way below normal levels, with the ongoing pick-up in crude prices only serving to worsen the margin contraction for the likes of Valero Energy Corp., Marathon Petroleum Corp., and Phillips 66. WTI and Brent prices have staged a strong rally over the past few weeks after production cuts by OPEC+ and independent producers in the U.S. and elsewhere helped ease a huge supply glut and storage buildup. OPEC and its allies agreed to extend the cuts by an additional month with plans to review progress on a monthly basis. Global oil demand particularly in the giant markets of China and India appears to be recovering at a faster-than-expected clip, with crude imports in China surging 13% in May to a record 11.3 million barrels per day and demand back to 90% of pre-crisis levels. Meanwhile, May sales in India were recorded at ~76% of normal levels while U.S. gasoline demand has seen a 7% uptick during the final week of May to clock in at 75% of pre-Covid-19 levels.

But analysts are now questioning whether the rebound in demand is the result of rising consumption or simply the result of refiners and traders stocking up on cheap crude.

ING's Patterson and Ehsan Khoman at Japanese bank MUFG say the surge in demand could partly be the result of opportunistic buying by refiners. Consequently, Goldman has predicted that Brent prices will pull back to $35.00 per barrel in the coming weeks from a recent high of $43.00.

And they could be right.

According to Bloomberg, the United States' largest refiner by capacity, Valero Energy, is currently running its 2 crude units at just 58% of their maximum rate of 424K bbl/day due to low demand and storage filling up. The refinery's fluid catalytic converter as well as all the hydrotreaters except the distillate hydrotreaters are running at minimum rates while rates on the coker have also been lowered.

In a previous article, we reported that giant oil traders have been storing millions of barrels of crude in the seas with a view to selling when prices improve in the coming months, which could also be driving the surge in demand.

Takeaway
At this juncture, it's best for investors to adopt an attitude of cautious optimism. On one hand, the bulls argue that OPEC+ has curtailed production too fast, with some oil executives eyeing the seemingly untouchable WTI prices of $70.00 in the current year.

On the other hand, poor refining margins are telling a different story while oil prices have, worryingly, been strongly pulling back from recent highs on fears that increased production by U.S. shale producers and Libya will offset the OPEC+ cuts.

As many analysts have pointed out, the biggest wild card in this market remains the speed at which demand is going to bounce back in the coming months.

The current evidence though appears to lend support to the bull camp.