Precious metals are in alignment for a major ascent Precious metals expert Michael Ballanger discusses silver's recent price performance and why he believes precious metals are in alignment for a major ascent.

"Every stock market bull out there whether in New York or London or Mumbai or Beijing is in a drunken myopia of elevated expectations and deviated denial scrambling and scratching and pleading for assurances that 'it is truly different this time.'"

Writing a missive such as this one has been a labor of love for me since the mid-1980s when I began to observe how stock market investors behaved at or near major inflection points—meaning "tops" and "bottoms." It all began in London, Ontario, in the summer of 1982 when I was in attendance at the annual London Chamber of Commerce Annual Canada Day barbecue where business types of all persuasions came together to "try to hustle up some new business," a 1980's version of the 2017 term "networking." Situated near to the bar was a bank of phone booths with the name "BELL" emblazoned on their roofs, which were the only forms of communication back then (or as my kids say "WAY back when") while the men in their penny loafers and corduroy jackets with patched elbows sipped rye whisky and/or beer (the heavier the better), swapping stories about the state of the markets, stock and real estate. 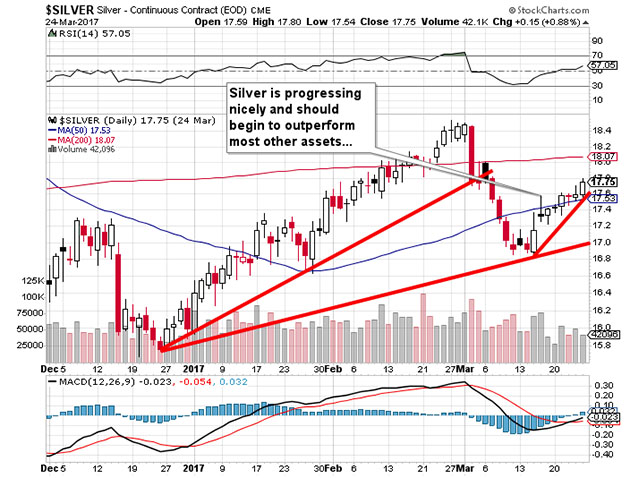 In the summer of 1982, interest rates were perched atop the mountainous aerie of 19% in Canada and I recall how as a young financial advisor I was chastised by my peers for taking $50,000 of a customer's trading capital and investing it in Government of Canada bonds maturing in 2001 and paying 16.75% semi-annually. "Kiss that money goodbye!" was the response I got for sacrificing a predictable return for the client versus "trading" where the turnover would generate infinitely more commissions than those "boring" bonds.

At the same time, I was standing by the cocktail bar at this summer barbecue listening to a real estate agent lampooning the stock market with remarks like "Nineteenth month of the downturn for stocks and real estate just keeps chugging along," as literally a dozen people listened intently. Not to be outdone, I tried in vain to add my input to the discussion but the moment the audience discovered my profession, they backed away as if I were carrying some tropical disease and gravitated to the realtor.

Two months later, in August of 1982, stocks exploded on an 18-year run that dwarfed any returns seen in the real estate markets in an ascent that lasted until the summer of 1987, when the scenario seen in 1982 had completely reversed. I was again standing at the bar (no surprise there) holding court and describing why stocks were at a "permanently high plateau" (Irwin Fisher 1929) and why they were still "undervalued" based upon "price-to-book" or "price-to-cash-flow" or "price-to-bond-yields" but as I was droning on and on and on, I chanced upon the smiling face of an elderly gentleman, smiling up at me adoringly, notebook in hand, while nodding at everything I was saying.

After I had concluded my diatribe, I approached this nice old chap and asked him his name to which he replied that he "could not remember" nor could he recall where he lived or why he was there. When I asked him what he had been writing down during my speech, he said that every company I had mentioned was going into his portfolio, especially the one that guaranteed the 19.75% return and could I give him the symbol?

It was that elderly gentleman that prompted me to come up with my proprietary stock market timing model "The Summer Barbecue Indicator" where the degree of stock market risk was directly proportionate to the number of people listening to me at the bar. For the next nearly 22 years, this indicator has been the most accurate of them all, not once failing to predict a market top and/or bottom until the summer of 2009 immediately after the sub-prime meltdown when the Western governments prompted their central banks to support stocks with TARP, FARP, BARK and Cue-E. Since then, the E-Trade millennials just stare into their iPhones for the instantaneous "Robo-Advisor" guidance and look at me disdainfully as they roll their eyes and mutter something about "buying the effing dip."

Observing stock market participants today in 2017 is reminiscent of that elderly gentleman back in 1987 complete with convenient memory loss and rapidly approaching dementia. Because of the shameless creation of massive quantities of debt around the globe, the dynamic duo of stock and real estate speculation has become the unintended consequence of unprecedented monetary inflation where central banks have shorn the last vestiges of respect for the sanctity of currencies and the nurturing of their respective purchasing powers. Be it the U.S. or Canada or the European or Asian theatres, politicians and their deep-rooted awe of the global banking oligarchs have sacrificed the welfare of the middle classes for the favors and blessing of the elite banker classes.