Great Panther is on the prowl for acquisitions Great Panther Silver's modus operandi is to buy a past-producing mine, get it up and running as quickly as possible, and use the cash flow to fund more acquisitions, says CEO Bob Archer in this interview with The Gold Report. Having succeeded in Mexico with Guanajuato and Topia, the company is now taking on Coricancha in Peru.

The Gold Report: Can you start off by telling us about your perception of the silver market and how you think silver is going to perform in the Trump era?

Bob Archer: I believe precious metals bottomed near the end of 2015. Through 2016 we saw quite a nice rebound both in metal prices and in market sentiment, so that's been very positive for the industry. The price of silver rebounded a lot faster than the price of gold. That reversed the gold-silver ratio that had been going up until the end of 2015, when it peaked at about 83 or 84.

Through 2016, on a percentage basis, silver outperformed gold, so the ratio has dropped back down. At one point it got down to around 65, but it's back up around 70 right now.

I think that trend will continue: The gold-silver ratio will continue to decrease. The longer-term average over the last 10 to 20 years has been around 60. But when metal prices peaked in 2011, that ratio went down to about 35. So there is a very good sense that silver will outperform gold quite significantly over the next few years.

As far as Mr. Trump is concerned, so far he's been really good for precious metals, largely because the market does not like uncertainty, and that pretty much surrounds him like a cloud. Nobody really seems to know what to think. As long as that uncertainty is out there, precious metals will do quite well.

TGR: Would you tell us a little bit about your own history? You're a geologist, and your first ventures were in exploration. Then you moved into production. What did you learn from this?

BA: One of the key things that I learned was that exploration companies are solely reliant on the markets for funding. Given the cyclical nature of this business, it's great when things are going well, it's easy to raise money and you can fund your programs. But when you go through a downturn, you can get several years where it's virtually impossible to raise money for exploration companies and exploration projects. Those times can be extremely difficult.

So when my original business partner and I started out with the concept of Great Panther Silver Limited (GPR:TSX; GPL:NYSE.MKT), our business model was to get into production as quickly as possible and then grow the company primarily out of cash flow. That way we wouldn't have to weather these cycles quite so badly. I am pleased to say that we have been successful in doing that, and we've emerged from this last downturn stronger than ever.

TGR: Great Panther has two mines in Mexico: the Guanajuato mine complex and Topia. Do you anticipate difficulties in conducting business in Mexico in light of tensions between the Trump Administration and the Mexican government? 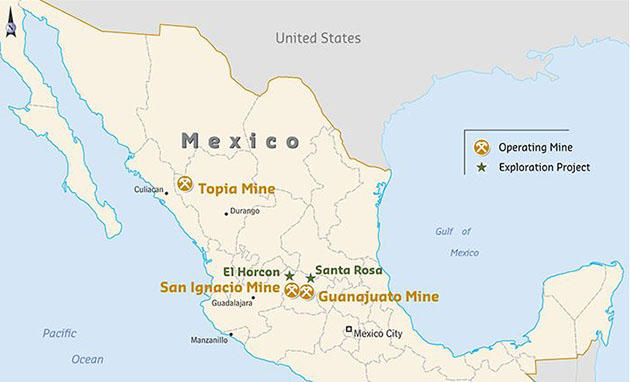 BA: Mining doesn't really seem to be affected too much by all of that. If anything, it's been beneficial for us because the tension has created a lot of weakness in the Mexican peso. The foreign exchange rate has worked to our benefit because most of our costs in Mexico are in pesos, while revenue is in dollars. That favorable foreign exchange rate has been one of the things that has helped us to push our cash costs down over the last couple of years, last year in particular.

TGR: Would you tell us about your Mexican operations?

BA: Our Guanajuato operation is our flagship; it provides more than 75% of our production. We produce silver and gold from Guanajuato in the form of a pyrite concentrate that gets sold directly to smelters. There are two mines operating there that feed into one central plant. The bulk of the production, about 60% of it, comes from our San Ignacio mine, which was a discovery that we made in 2010.

Because San Ignacio lies just outside the city of Guanajuato, and just outside our main property and plant, we were able to bring that into production very quickly. We're just trucking the ore around to the plant, so we didn't have to build a new mill facility or permit tailings ponds. We were able to go from a discovery hole to commercial production within three and a half years, which is a very fast time frame in the mining industry.

We're continuing to grow the resource base at San Ignacio. Lots of good things ahead for that project and for the mine in general.

Our other mine is called Topia, which is located in northwestern Durango. It's a narrow-vein silver-lead-zinc mine with a small amount of gold. Topia is higher cost than Guanajuato largely because of being labor intensive but is still profitable. We produce a lead concentrate that contains the silver and a zinc concentrate as well, both of which get sold to a metal trader in Mexico. Topia typically generates about 1 million ounces (1 Moz) a year of silver equivalent (Ag eq), while Guanajuato produces about 3 Moz Ag eq. So in total we're producing around 4 Moz Ag eq annually.

TGR: In 2016 Great Panther's production in Mexico decreased. What happened?

BA: We had produced about 4.15 Moz in 2015, and we dropped down to about 3.9 Moz in 2016 largely because of a couple of temporary shutdowns at Topia in Q3 and at Guanajuato in Q1. Then we shut down the Topia plant on Dec. 1 to conduct some upgrades and maintenance, as well as to switch over the tailings storage facility there from a wet tailings deposition to a dry stack.

The plant is still shut down at Topia but that project is almost complete. We should be back up and running this month.

The other reason was that grades were slightly lower at San Ignacio last year than they were the previous year. That's really just natural grade variability within the veins as we move along strike. We're bound to get that within these types of systems. Some years are better than others. But these are just typically slight variations.

Our forecast for this year is to be back up between 4 and 4.1 Moz.