Now granted, nobody can mine every ounce of any resource in any deposit. There are always constraints. But having almost $60 gross metal value for every share and only pricing it at $0.36 is pretty close to absurd. A one percent valuation would give you a $0.60 stock. And given that the company is working hard to increase their visibility, I think shareholders will see that soon enough.

Canada Zinc is mobilizing for an aggressive 2017 exploration program at the Cardiac Creek deposit that is part of the Akie project. The deposit has seen 139 drill holes totaling 59,260 meters but only 104 of those holes were used in the existing 43-101. There are another 35 holes consisting of about 12,500 meters of core that will be factored in the next 43-101. This year's program consists of two rigs doing a total of 7,500 meters of drilling. The program will begin in early June and continue through September. Results will be released on a regular basis.

While focused on Zinc in Northern BC, Canada Zinc is hardly a one trick pony. In September of 2013 they optioned properties nearby to Akie they call the Pie, Yuen and Cirque East projects. Teck and Korea Zinc agreed to spend $8.5 million in combined exploration to acquire a 70% interest in the three deposits. So far the partnership has spent about $3.2 million. They have until the end of December 2019 to complete their earn-in to get the 70%.

In the past year zinc has been a star performer, moving over 100% higher from just over $0.60 in December of 2015 to $1.33 two weeks ago. While interest in zinc has increased, the share price of CZX has yet to even match their peer group. According to a study done by TD Securities, the average zinc stock gets $0.026 per pound of zinc equivalent in the ground while Canada zinc gets less than 1/3 of that at $0.008 per pound of zinc equivalent.

With $7 million in cash in the bank and three major zinc-mining groups as shareholders, Canada Zinc looks very attractive. Their story is compelling. I think they are an easy triple and higher as the market gets it. 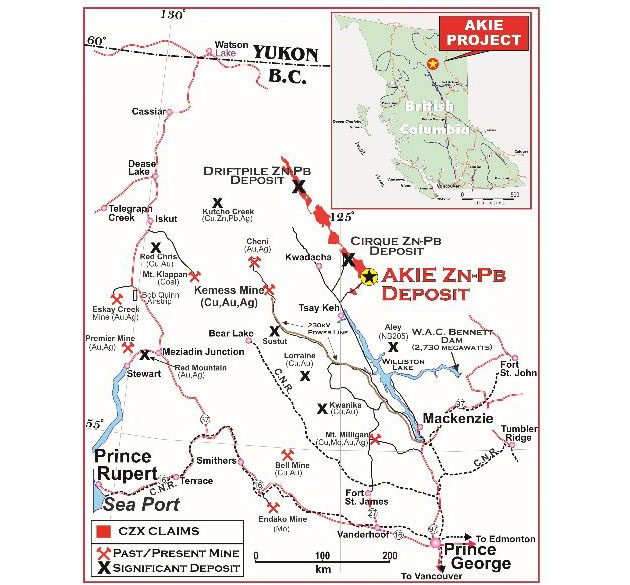 Canada Zinc is an advertiser and I have bought shares in the open market. Their presentation is excellent and I highly suggest anyone interested in zinc to download it and read. Do your own due diligence.