Where is the gold to feed golden dragon in 2014? All eyes are on the FOMC this week and speculation is high that the Federal Reserve may taper. Fed policymakers gather for the last time in 2013 for a two day policy meeting that concludes this Wednesday.

The dreaded 'taper' is becoming a bit of a caper as the death of QE is greatly exaggerated. While a taper is indeed possible, any reduction in bond buying is likely to be small and of the order of less than $15 billion. This means that the Fed is likely to keep its bond buying program at close to $70 billion per month which is still very high and unprecedented for any industrial nation in modern history.

This still high level of debt monetisation, in conjunction with continuing zero percent interest rate policies is bullish for gold.

Gold was higher last week which was positive from a technical perspective but as of late morning trading in London, there has been, as of yet, little follow through.

The dollar looks overvalued, considering the overly indebted U.S. consumer and government, and is likely to come under pressure again in 2014 which will support gold and could lead to a resumption of gold's bull market.

2013 has been a torrid year for gold and it is down 26%. Given the still strong fundamentals, we are confident that in a few years, 2013 will be seen as a mere blip in the context of a long term, secular bull market which will likely see gold prices have a parabolic peak between 2016 and 2020.

ETP liquidations have been one of the primary reasons for gold's weakness in 2013. ETP holdings may continue to fall as more speculative investors reduce allocations to gold and some ETP buyers sold in order to move to the safety of allocated gold.

However, the supply demand data clearly shows that ETP liquidations are being matched by robust global demand, especially in China. Even if ETP holdings dropped by another 300 plus tonnes in 2014, average Chinese imports through Hong Kong alone are running at well over 100 tonnes per month.

Outflows of gold from ETFs amounted to 24.3 million ounces, nearly 700 metric tonnes, in 2013 from their peak at the end of 2012. Much of this gold was taken out of ETF holdings in London and shipped to refineries in Switzerland, where it was melted down and made into kilogramme bars, then sent to Hong Kong and ultimately to China.

Imports from Hong Kong to China totaled 26.6 million ounces or 754 metric tonnes through September alone. It is unknown where the gold would come from to replenish these ETF holdings were there a sudden surge in demand in the West in the event of a new sovereign debt crisis or a Lehman Brothers style contagion event. 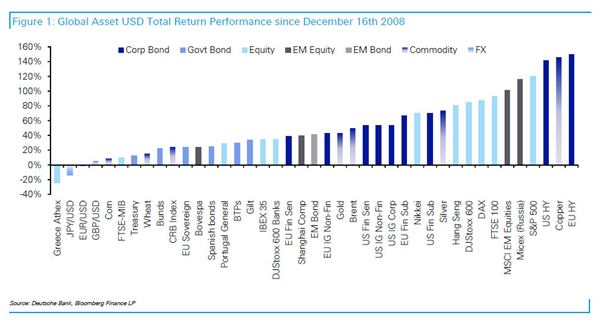 Despite the 26% fall in 2013, gold is 44% higher in the last five years and has protected those who have bought it as a long term hedge and financial insurance against macroeconomic, systemic and monetary risks.

There is much negative noise and sentiment towards gold due to the recent price falls. The smart money ignores this noise and continues to focus on the long term. We are confident that gold will again perform well in the coming five years and protect investors from the considerable risks lurking out there today.

It is worth noting that gold fell 25.2% in 1975 (from $187.50/oz to $140.25/oz) and many experts pronounced the death of the gold bull market. Experts such as economist Milton Friedman warned that gold prices could fall further.

Gold subsequently rose 6 times in the next 4 years - from January 1976 to January 1980 -  proving many extremely wrong. 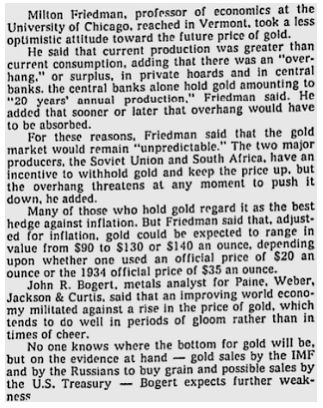 A historical perspective is valuable today and history does not always repeat but often rhymes.

The death of the gold bull market is greatly exaggerated.